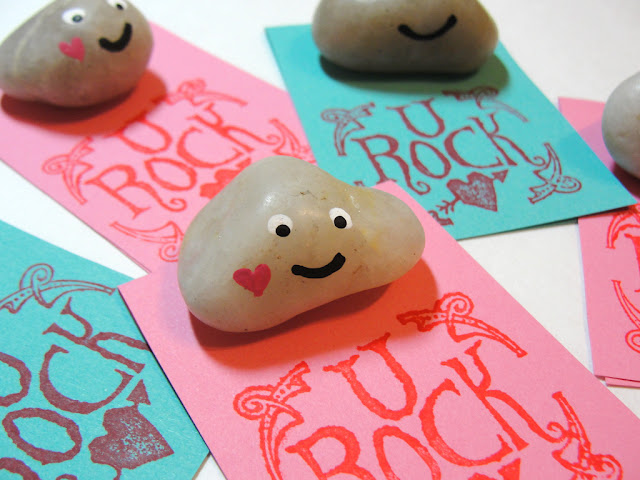 I have been seeing a ton of adorable diy Valentine's this year in the blogosphere, that I will likely show you soon. But my kindergartner's party is Friday, so I had to go ahead and make something for his class now. 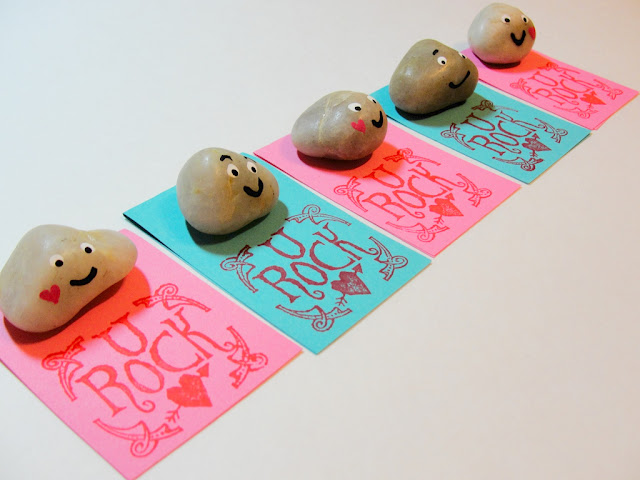 So we headed to Micheal's to check out their V-Day offerings. They have tons of cute stamps on sale for 49 cents. We originally got a cute robot holding hearts, and a hedgehog that said "I'm stuck on you".. but the "U Rock" stamp caught my eye. So after going down aisle by aisle, I wasn't really seeing anything that was a) affordable and b) not too girly or c) had enough for each child... and I *almost* resorted to forgetting the diy thing and getting a store bought boxed set, (no offense to those who do, I still love the Strawberry Shortcake and My Little Pony ones I got as a kid), I was just determined to do something crafty. When I saw these bags of rocks, the "U Rock" stamp entered my mind and I thought, Pet Rock Valentines! Don't kids love rocks? My son was sold on the idea. 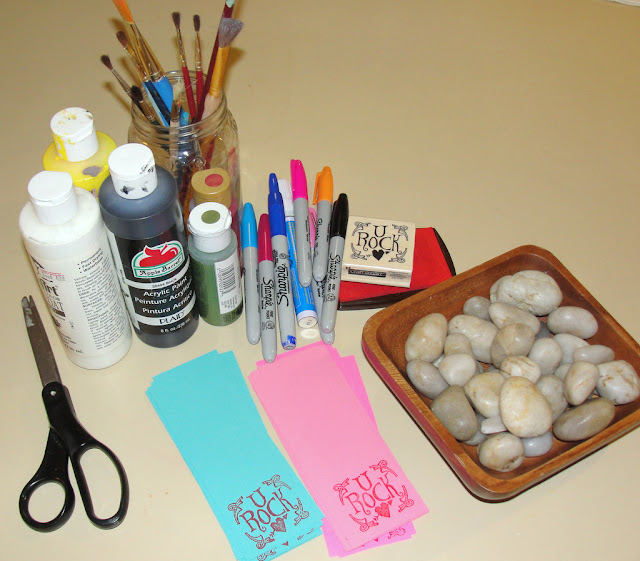 So, you need a few pieces of scrapbook paper, ink pad and a stamp (or just write the message out), hot glue and glue gun, rocks, paintbrushes and paint. I had most all of these supplies, so it was pretty easy and inexpensive to do. I tested my permanent markers on a rock, and they didn't show up well enough, so I settled for paint. 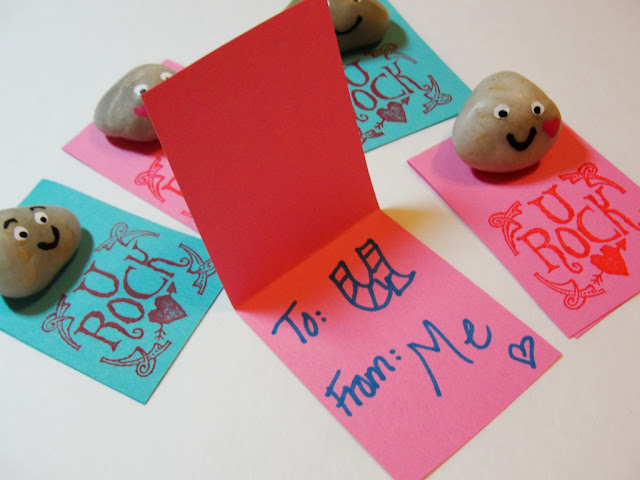 Stamp on the two outer/parallel edges of paper, then cut the paper in half. You can get about 12 cards from one large square piece of scrapbook paper. Once they are all cut out, fold in half and hot glue your rock above the stamp, and write your message inside. Perfect, original and cute for non-candy Valentines.

But...  on the rest of the Valentines, I accidentally folded the paper wrong and had already written on the backs, so I had to get creative with that extra flap.. I hot glued the Starburst on both sides and stuffed it in there for a little pocket. Just enough glue to keep it in place, so the kids will be able to still get to the candy quite easily. The rocks can be peeled off pretty easily too. 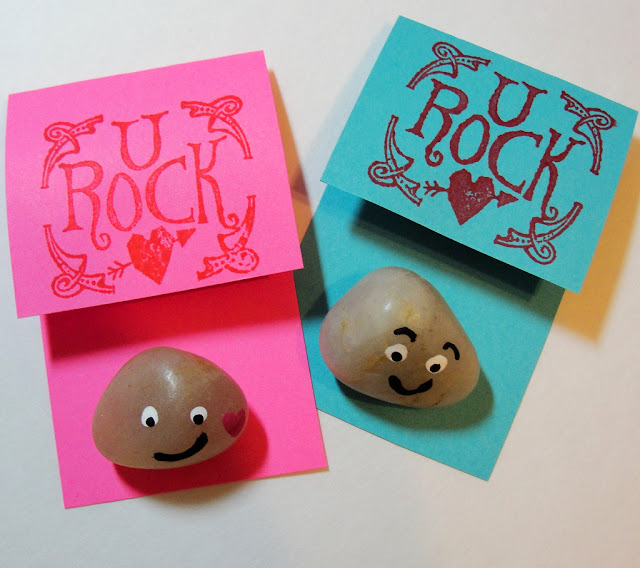 Not as cute in my opinion, but hey, they are for little kids who are going to be on the hunt for candy anyways, right? 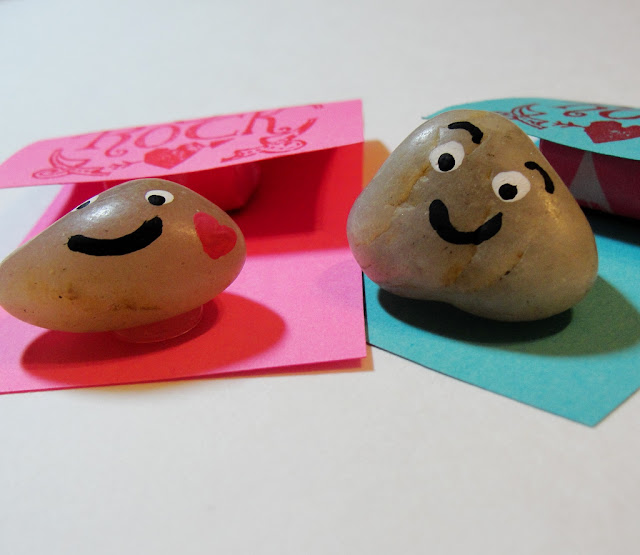 My girl rocks have little hearts on the cheek, and my boy rocks have eyebrows. If you know the kids well though, it would be cute to make them more original with eye and hair color, glasses, freckles, or even go silly with mustaches, pirate patches, eyelashes and that sort of craziness... The two below are the ones I made for my kiddos. 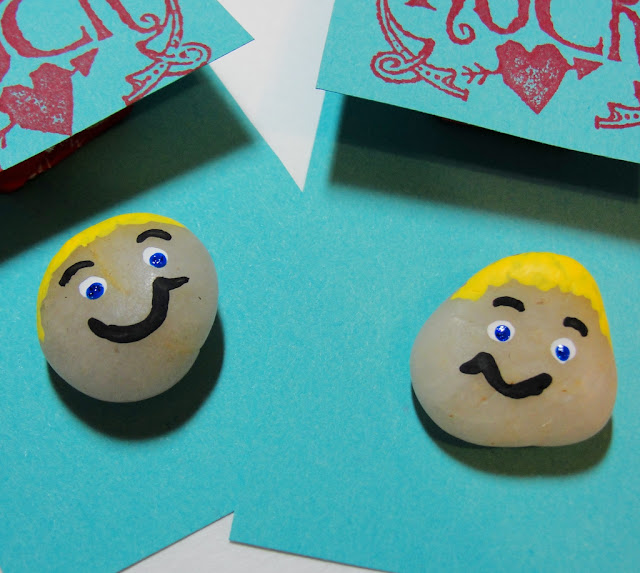 If you make a Pet Rock Valentine, I'd love to see it! Happy crafting :)

I think they are adorable!

This is a great fun idea. I make story sacks that are filled with books, crafts, games and a toy. This would be a perfect craft for my sack idea based off a boy and his pet rock. The kids could make one for themselves and one to share. Great idea.

Where can I get that stamp? 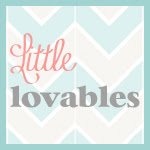 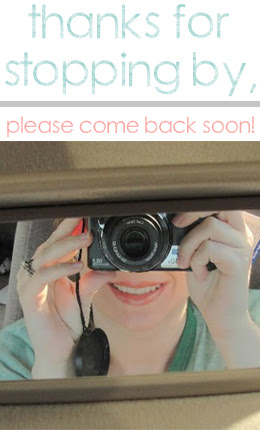