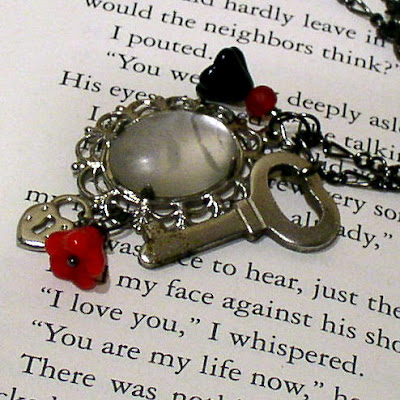 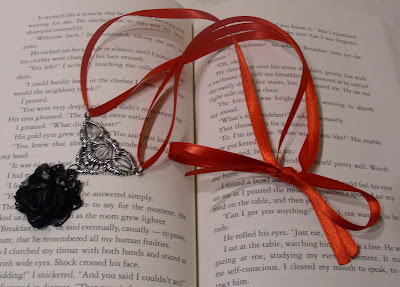 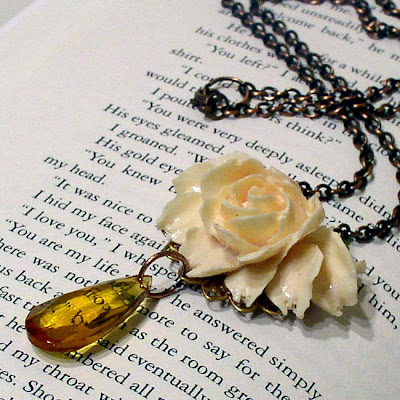 So in order to help turn my Twilight obsession into something productive, I have decided to make Twilight inspired jewelry. It has been sooo fun coming up with new designs and I have lots more in my little head just waiting to be created once my supplies start coming in the mail! See the others and purchase yours HERE!

In the meantime, I sooo wish I had these bedsheets by Tiago da Fonseca, but with a page from the Twilight series of course! 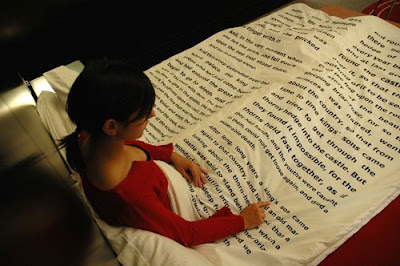 I just had to share this pb and j by Mpatrizio because it is my life sustanance and that it is just too darn cute not to post. Like a little Edward an Bella sandwich! 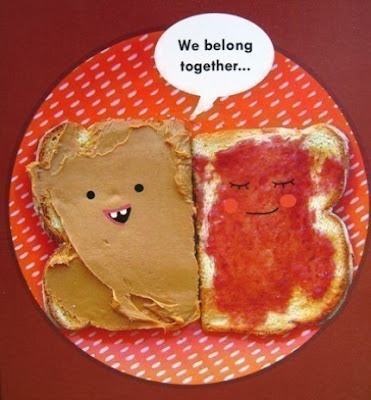 Also, I posted earlier that I would be posting some of my writings in my LittleLovables Etsy shop in mini books, but every time I pull them out to finese them, I start thinking about Twilight and thoughts of inferiority cloud my mind. WHat is worse, when I try to write something NEW... all I can think about are editions to the books that I would have made... my creativity is totaly shot! No new ideas exist in my head! Thanks, Stephenie Meyers, I will just have to purge myself of all things Twilight so that I can get my mind back. But not until AFTER Breaking Dawn, and the movie, and Midnight Sun... maybe reading the Host will help clear my mind?

For now, my children progress in the creativity world. My 2 1/2 year old drew our dog... an exact image, what an artist! And yes, I was a tired, mindless wit (as explained above) and I wrote the wrong date on his magnadoodle art! 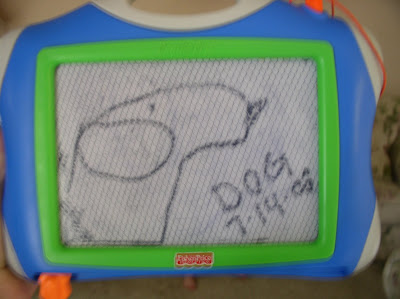 Color, It's Good For You.

But enough of that, gimme some color. It's refreshing to have a splash every now and then! The best is convertible color, something that will work well with your monotone decor, so you can change it around when the mood and seasons fit. This is my ultimate goal, to get nice shabby twill/canvasy slipcovers to perfectly hug my couches so I will not be confined to sage and taupe florals forever (like these Pottery Barn ones below)! What I am craving now: 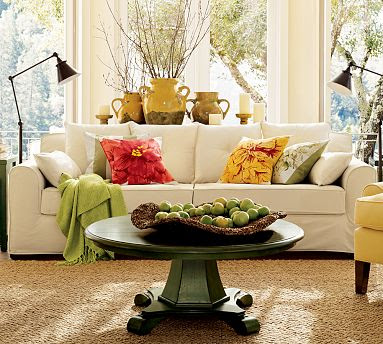 Get you a simple bouquet and split it up among little vases. I use beakers in patina metal casings and I am on the hunt for some white porcelain vintage flower frogs for this very purpose. 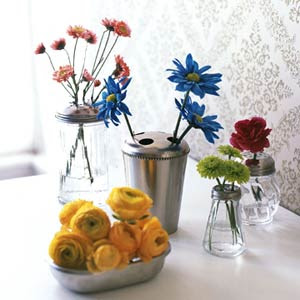 What an excellent use of outgrown crib mattresses! Better Homes and Gardens takes the cake by covering them and little chairs and turning them into a tiny loveseat. 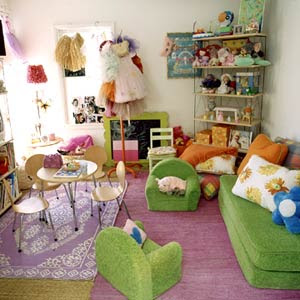 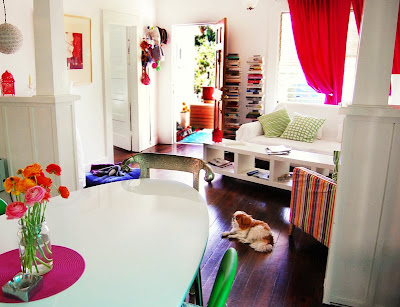 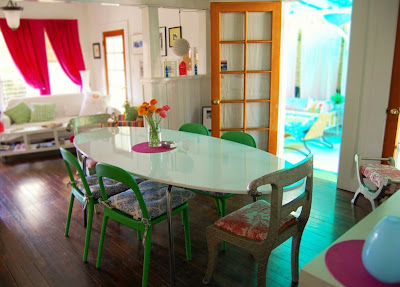 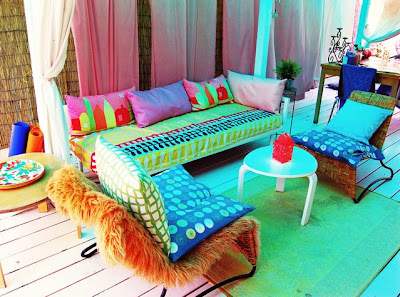 Missing my Dad on Father's Day 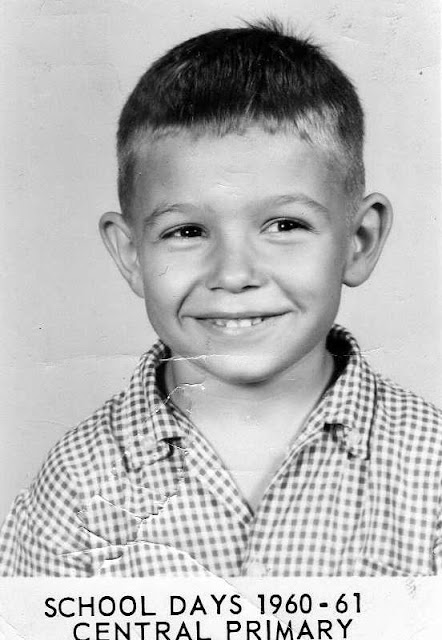 Well, Father's Day was yesterday, but I didn't get on the computer AT ALL as part of my "gift" to my wonderful hubster, he heh. 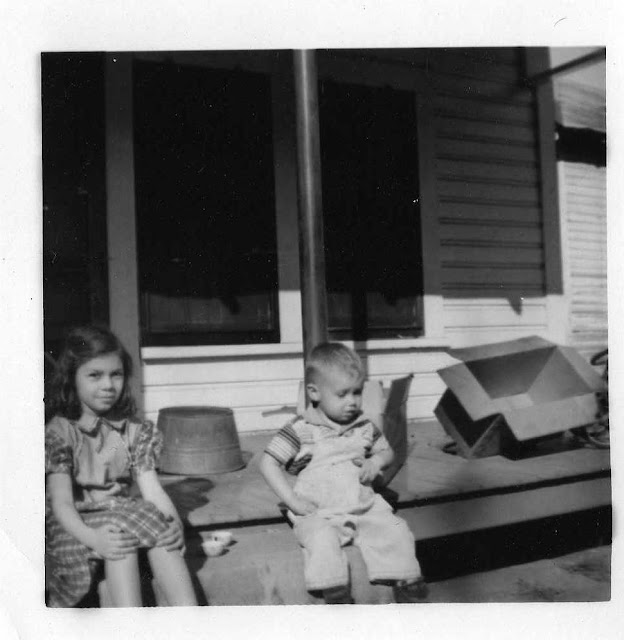 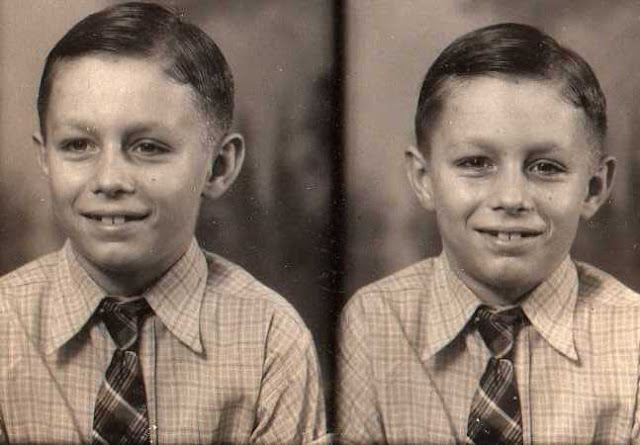 (my dad's dad, Grandpa James Alton Smith, who also died of leukemia before I was born).
But I did want to write a little about my Dad. He was diagnosed with Chronic Lymphacitic Leukemia when I was 6 months old. He underwent 2 bone marrow transplants, complete sterilized isolation, various rounds of chemo and radiation, a spleenectomy... He then developed squamous cell carcenoma in the face from his radiation poisoning throughout the years. He had almost all of his teeth removed, bones in his face removed as well as his upper palate in his mouth. He had exposed bone in his cheek that he covered with a thin gauze until he was healthy enough to receive a skin graft to patch the hole up that his skull peeked through.

He was fed through a feeding tube in his stomach for a couple of years and I still remember hearing him scream from the hospital waiting room the day he had it removed. So many memories. 14 different times, we were told as a family to go home and prepare funeral arrangements. 14 times. 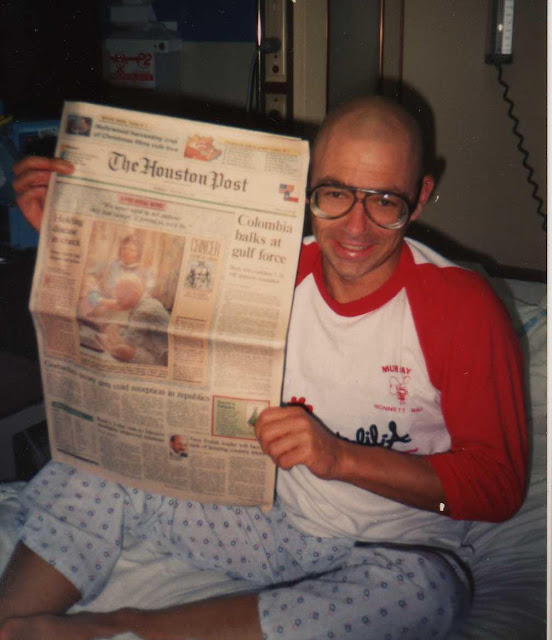 His body was his worst enemy, a total wreck. He went almost completely blind, couldn't hardly speak, he couldn't go in the sunlight, walk, read... which was so sad because he loved outdoor sports like hiking and he was an avid reader and talker/jokester. He endured vigorous and painful excersizes to restretch his mouth with a large rubber mouth block, so he could speak a little. His frail frame wasted away. His eyes were uneven, food sprang from them like tears when he attempted to eat. He considered having one of them removed. Some people stared, even adults who knew better laughed at his Frankenstein like face, for it was horribly disfigured from all the bone removal and skin grafts over much of it. Wretched people, he didn't choose this! 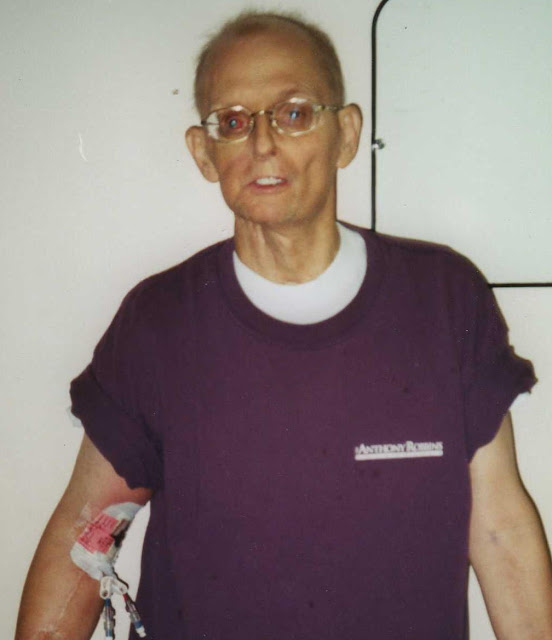 But he kept on. He caught when doctors misdiagnosed him several times because he did his own studying (before the days of easy internet research.) He broke isolation by leaving his sterilized room (which can be fatal for a zero immune system patient after a bone marrow transplant) because the nurses wouldn't check him that his lungs were filling up with fluid... had he not taken that step, he would have drowned and died within minutes. He could barely lift his head or finger, he was so weak, but he knew he had to somehow get out of the bed, walk across the room and open the door to save his life. He did, then collapsed on the tile floor. 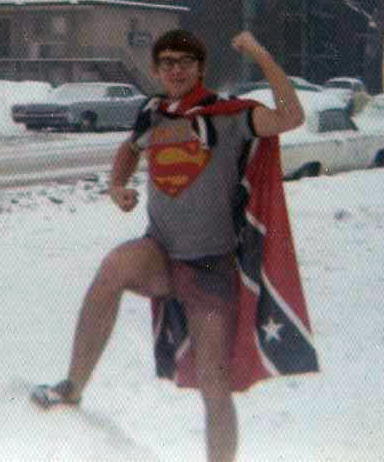 southern boy superhero... this pic was made into a sculpture by midnight orange here
He continued writing poems and songs, he told jokes and was a master storyteller, even volunteering at children's camps. He dressed up in clown costumes and did cartwheels to make THEM feel better. He loved God and trusted in his plan, never cursed him or asked "Why me?". He accepted his challenge with fate and learned from him, perfected himself because of it throguh Christ's example. He continued on his spiritual journey and inspired so many through his struggles and sunny outlook. He was a total refined and perfected being.


Perfected as in complete, whole. 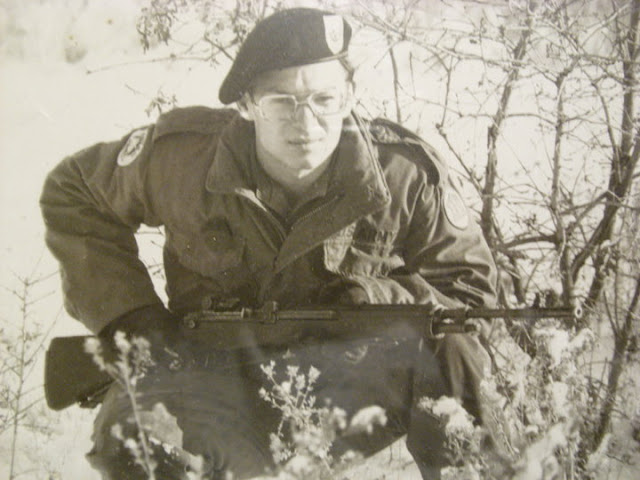 my dad, who was a Ranger, sharp shooter and 2nd lieutenant, in this ROTC at BYU pic around 1976

His last email to the family he wrote was, "I am going to have this thing beat in June." He died June 1st 2002, and so, he DID beat it in June. His beautiful spirit was no longer confined by a broken and agonizing painfully weakened body. A nurse injected him with a dirty needle and he got MRSA in the blood. It happened at the VA... many many many horrible things happen at the VA, news and lawsuit worthy things, but you can't sue the government. His end came in the same hospital that I later delivered my two children in. I was in Utah at the time of his death. My mother called me with the news and I was in denial. I flew home to say goodbye and never looked back. His death changed me for the better, as I strive to live up to his example if I can. 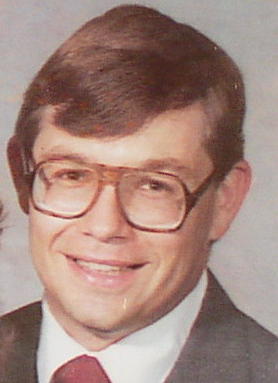 he was always so cute, with such a happy grin and bright eyes
I love you and miss you, you would love my husband, you would be the best father in law and grandfather. But I know that you escorted my children's spirits here, I know you were there on my wedding day and I know you watch out for us. I love you and will see you again Daddy! 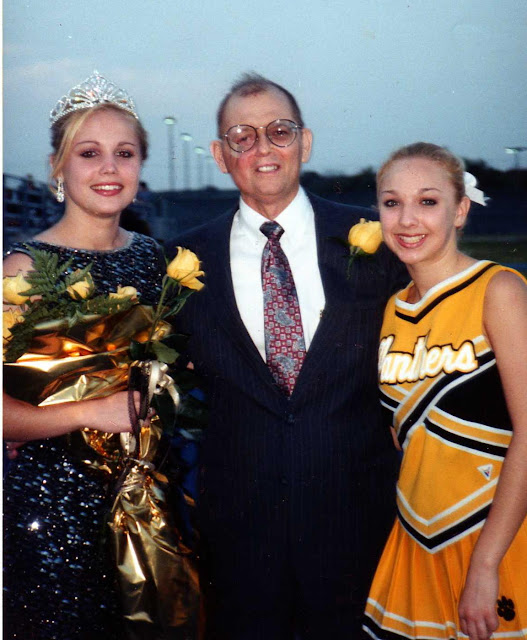 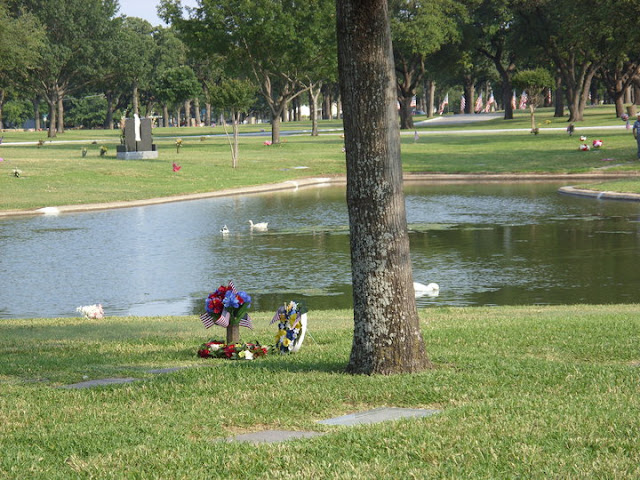 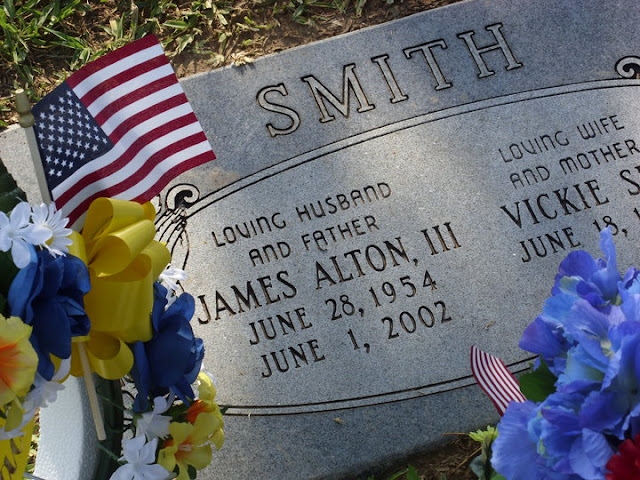 I came upon this excellent necklace guide, that tells what certain length necklaces are good for on the QVC website. This info is good for me to remember as a designer as well as for those who wear necklaces, so, here's the scoop! Lengths may need to be adjusted according to your body shape.

Collar (12-13 inches)
Collar necklaces lie snugly around the middle of the neck. They are a must-have when wearing V-necks, boat necks, and off-the-shoulder fashions.

Choker (14-16 inches)
Both classic and versatile, a 14-16 inch choker falls perfectly around the base of the neck. A simple choker necklace matches any outfit and just about any neckline.

Princess (17-19 inches)
As the most popular necklace length, the princess necklace is best suited for crew and high necklines, falling just below the throat. Typically 17-19 inches long, you can wear the princess length as a contrast to low, plunging necklines. Add a pendant for a bold, eye-catching look.

Matinee (20-24 inches)
Longer than the princess necklace, and slightly shorter than an opera length, a 20-24 inch matinee necklace is the right choice for casual or business dress.

Rope (over 45 inches)
Measuring at least 45 inches in length, the versatile rope necklace is a must-have accessory! Elegant and classic, this necklace dresses up any outfit night or day. Often, clasps placed in strategic locations allow this necklace to be transformed into multi-strand necklace or bracelet. 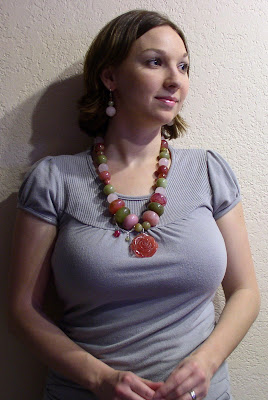 This is a 24 inch necklace I created with rainbow soocho jade, cherry quartz, and a carved rose quartz pendant as a custom order for a wedding. This was heavy, and gorgeous!
at 6/07/2008 6 Little Thoughts 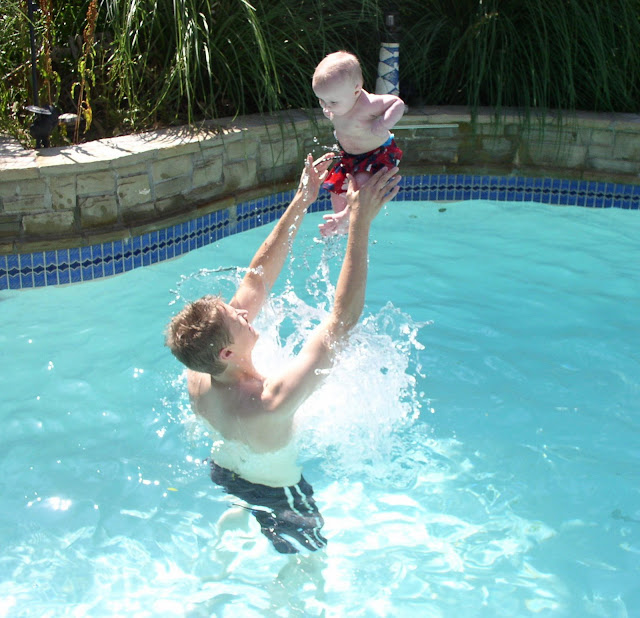 In this crazy heat, with a broken car air conditioner (that is going to cost us $800 to fix), we decided to take our little chitlans swimming. It was baby Caleb's first time and he had a ball. I thought now would be a good time as any to showcase a fitting assortment of yummy blue finds. 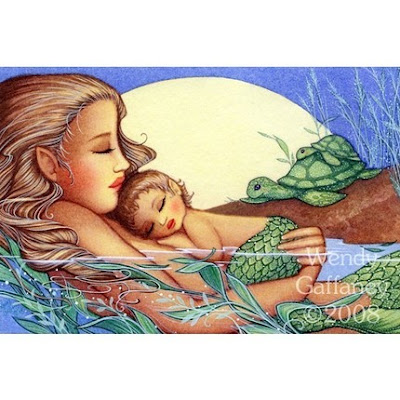 Also, if you are a Twilight fan, you will be happy to know that Stephenie Meyer is writing a new book from Edward's perspective, called Midnight Sun. Read this first working draft of chapter one here. Don't read it it you haven't read Twilight, it will ruin it for you! 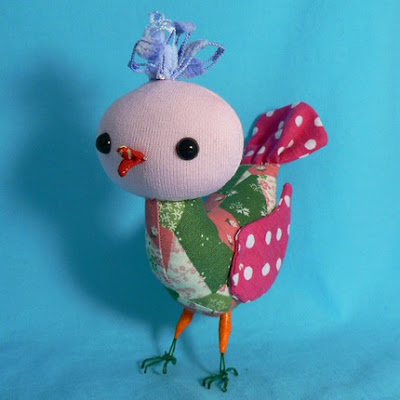 
I am also going to be listing some of my original short stories and poems in my Etsy shop in sweetly scrapped books. Stay tuned... I may cheat and list a discounted pdf email version first. 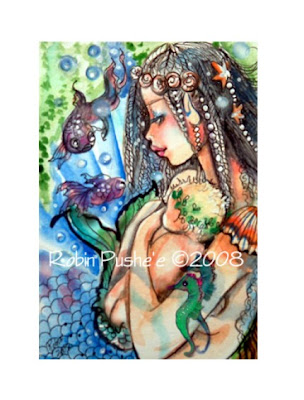 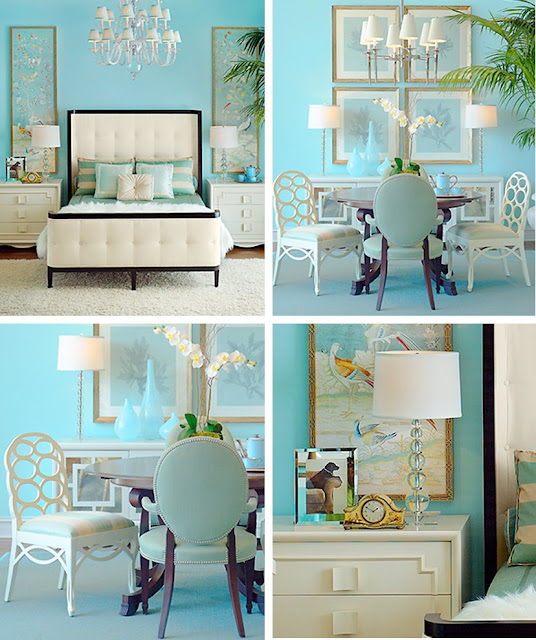 I really wish I could remember where this beautiful room came from.
at 6/04/2008 1 Little Thoughts